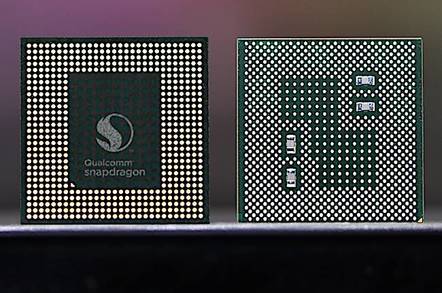 Qualcomm’s flagship Snapdragon 845 system-on-chip will include an isolated security core for handling sensitive personal information, among other new features.

The California chip designer showed off its upcoming 845 component at a tech summit in Hawaii on Wednesday, promising the silicon will power 2018’s high-end Android smartphones and most likely future Windows 10 PCs – following in the footsteps of its older sibling, the Snapdragon 835.

Here’s a summary of everything we’ve been able to gather from staff at litigation–magnet, Broadcom-stalked Qualcomm.

The 845 will be a 64-bit Armv8-compatible 10nm FinFET system-on-chip fabricated by Samsung using the Korean manufacturing giant’s 10LPP (low power plus) process technology. The package is about the same size as the 10nm FinFET 835, and packs in three or more billion transistor gates.

Qualcomm toyed with the idea of going to 7nm, rather than sticking with 10nm for the 845, but felt chip factories – cough, cough, TSMC, Global Foundries – couldn’t ramp up enough volume to fulfill their orders for millions of smartphones.

The Snapdragon 845 uses four customized Arm Cortex-A75 and four customized Cortex-A55 CPU cores. The tweaked A75s are the beefy power-hungry general-purpose brains of the device, clocked at up to 2.8GHz, and kick in when whatever code is running needs a burst of performance at a cost of battery life.

The modified A55s are called the efficiency cores because they require less power and provide less performance, and run application and operating system code most of the time, leaving the power cores to sleep. The A55s are clocked up to 1.8GHz.

The performance and efficiency cores each have their own private 64KB of L1 instruction and 64KB of L1 data cache. The performance cores each have 256KB of private unified L2 cache, while the efficiency cores have 128KB. They all share a 2MB L3 cache, and coordinate together using Arm’s DynamIQ technology. The eight compute cores are branded as Kryo 385.

Lap-slabtop-mobes with Snapdragon Arm CPUs running Windows 10: We had a quick gander

Interestingly, speaking of caches, the 845 has a system-wide 3MB cache between itself and its main memory. Whenever any internal component – the GPU, the CPU, the vector math units, etc – wants to access RAM, the requests go through this system-wide cache first. If the data to be read or written lies within the cache, it is accessed there and then, which is faster than going out to the main RAM.

This is good news for things like the vector math units, which twiddle lots of variables during machine-learning tasks, as they can play in the fast cache without having to go slowly out to memory over and over. It’s essentially a shared last-level cache for processing units that don’t typically have their own caches, such as the CPU cores.

The increase in cache, plus the fact the A75 can fetch and decode four instructions at once – one more than previous generations – as well as other improvements here and there, boosts the 845’s performance over the 835. Qualcomm claims the new chip is up to 30 per cent faster at certain tasks than its predecessor.

The tweaked A75s are, apparently, optimized for running non-Arm code under emulation, which is very handy seeing as the Snapdragon family is heading into Arm-based Windows 10 laptop-tablet computers that will run applications built for Intel/AMD x86 processors using emulation. Qualcomm also plugged into the 845 some internal bus quality-of-service mechanisms, and made some changes to the page table system to fit in its new hardware features that we’ll come to later.

As we reported in August, Qualcomm moved a bunch of its engineers off the Snapdragon CPU design team to concentrate on the Arm-compatible Centriq server processor. That left behind a skeleton crew to produce semi-custom versions of Arm’s stock Cortex cores, the kind employed in the Snapdragon 845. Qualcomm insists it can spin up a team to craft fully original Arm-compatible Kryo cores in future, if needed.

As well all this semiconductor nerd stuff, the 845 has various things to make next year’s smartphones using the silicon take better photos and video and do better at machine-learning tasks – the kind of thing normal people will notice immediately over their older handsets.

One thing Qualcomm was a little sore about is that it has been designing chips for years that can crunch vector math calculations rapidly in hardware, in its GPUs and its DSPs. These vector operations are crucial in machine-learning software, and being able to do them quickly in specialized hardware as opposed to slowly on general-purpose CPUs means things like AI-based image recognition and non-trivial picture processing can happen in realtime. Which makes users happy.

However, unlike a few other vendors, Qualcomm didn’t slap an “AI processor” or ‘neural network chip” label on its stuff, so now it’s grumpy that it looks like it’s behind the times, when really, its chips have been accelerating machine-learning inference code for ages.

And related to this, Qualcomm has kept its vector-math units generic, in that, they can handle whatever task you want to assign them, rather than forging dedicated processing units that do one or two particular tasks really well. Qualy’s engineers see that as wasted silicon: when you’re not running one of those specific workloads, the transistor gates for it are sitting dormant, whereas the fully programmable vector math units in the Snapdragons can crunch whatever is needed next – graphics, AI inference, image enhancements, audio processing, etc.

As such, the 845, like its predecessors, tries to provide a mix of computational engines for developers to enlist as required on the fly. The latest chip’s Kryo CPUs are good for 32-bit floating-point and 8-bit integer math (INT8 being very important to AI), the Adreno 630 GPU offers 32 and 16-bit floating point, and the Hexagon 685 DSP block is good for 8-bit integer and HVX – its vector extensions. You can program the bare metal of the DSP if you wish.

The upshot is that, in Qualcomm’s mind, the 845 has a decent amount of vector-math grunt for performing AI algorithms on the device, allowing apps to do stuff like inference and detection rapidly without burning through the battery. It supports Caffe, Caffe2 and Tensorflow, and the tech can be accessed via the Neural Processing Engine SDK.

The 845’s Spectra 280 image signal processor can capture Ultra HD Premium video: 4K resolution video at 60 frames per second, with 10bit-per-RGB-color and the Rec.2020 color gamut. That’s 30 bits of color per pixel as opposed to 24 bits. It can also capture up to 32Mp total from up to two cameras, and record slow-motion 780p video at 480 frames per second.

The GPU can also be preempted on a primitive boundary: in other words, while rendering polygons to the screen, the running thread can be stopped at the next primitive and be told to render something else. Normally, there’s a little bit of runway that a GPU has to land on before it can be switched from its current operation to another. This is supposed to be essential to realtime stuff like VR.

The GPU can also be used to perform foveation, where the most detail in a scene is concentrated at the center of view, where our eyes are most sensitive. That saves you having to render full-quality graphics across the VR display, which is inefficient because the viewer’s eyes can’t pick out that level of detail.

Instead, you show the most detail in the center of view and drop to a coarse-level outside that area. The Adreno unit will help identify where the viewer is looking and optimize the display for that center spot, which again is good for VR.

Another neat trick supported by the chipset is something called ImMotion, a post-processing technique where the user marks out an area of a video where motion is happening – such as a goldfish swimming around a bowl – and the system produces a cinemagraph of the scene.

The resulting video has the goldfish swimming in a looping animation while the background, a child staring at the bowl, for example, remains motionless, creating a poignant moment. Here’s some example cinemagraphs to get the idea. It could be neat.

The 845 also comes with Qualcomm’s X20 LTE mobile broadband modem, which can download stuff at up to 1.2Gbps, obviously depending on your network, plan, and reception. The chipset also supports multi-gigabit 802.11ad Wi-Fi, 2×2 802.11ac MU-MIMO Wi-Fi, and dual SIM-dual VoLTE – which means both SIMs in the handset can each get full access to voice-over-LTE at the same time.

One final thought: around spring next year, Snapdragon 835 Windows 10 PCs are coming. If they don’t sound powerful enough for you, well, it sounds as though Snapdragon 845 PCs are coming closely after. You may want to hold off to this time next year to get your hands on an 845-powered laptop-tablet.

A product brief of the Snapdragon 845 can be found here [PDF]. ®

The Power of Hyper-Converged Infrastructure

My open source software collection for 2017 1/2

What is AI Artificial Intelligence?